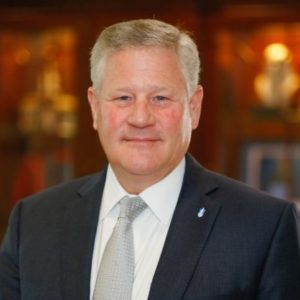 “Dr. Williams fits the profile as established for our next president perfectly,” said Dr. Robert C. Walker, chairman of Harding’s board of trustees. “He is a mature, spiritually sound and Christ-centered man. He aligns with our mission and understands our culture. He brings vision, strategic thinking and the business acumen of an experienced university president. He received overwhelming support from the board of trustees.”

Williams earned a BBA from Harding in 1985 and later returned to earn his MBA. He earned his EdD from the University of Pennsylvania. He began serving on the University admissions staff in 1987, was named director of admission services in 1991, and later appointed vice president of advancement in 2003. Williams has served as the president of Faulkner University since 2015.

“I am extremely humbled to be chosen as the sixth president of Harding University at this exceptional time,” said Williams. “Given the seismic changes in our culture, Harding is poised for this decisive moment. I look forward to collaborating with distinguished Christian scholars, extraordinary students and passionate alumni to envision a bold and robust future.”

Williams will assume the presidency of Harding on June 1, 2022, receiving the baton of leadership from current president Dr. David B. Burks.

About Harding University
Harding University is a private Christian, liberal arts university located in Searcy, Arkansas. Accredited by the Higher Learning Commission, it is the largest private university in the state. Harding’s student body represents students from across the U.S. and more than 50 nations and territories. The University offers more than 100 undergraduate majors; more than 15 preprofessional programs; more than 40 graduate and professional programs; as well as numerous study abroad opportunities including locations in Australasia, Peru, England, Greece, Italy and Zambia.