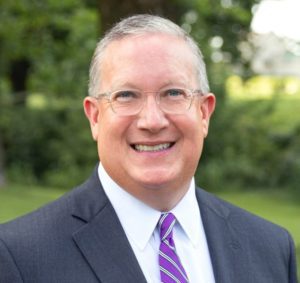 Additionally, Melson held senior leadership positions in business, healthcare, higher education, and ministry, including having served on the pastoral staff with John Piper at Bethlehem Baptist Church in Minneapolis, MN and at the Resurgence and Mars Hill Church in Seattle, WA. He previously served as director of admissions and student recruitment with Dr. R. Albert Mohler, Jr. at The Southern Baptist Theological Seminary.

Melson was selected from a pool of about 30 applicants in a nationwide search conducted by CarterBaldwin Executive Search.

“I couldn’t be more pleased with the outcome of our search process, and the services that CarterBaldwin provided were invaluable,” said David L. Brown, Chairman of the Presidential Search Committee at SBU. “At a critical time when we needed to make the right hire, Bill Peterson provided the expertise, encouragement, and professionalism that we needed to open doors for conversation with the right people. The entire CarterBaldwin team was creative, attentive, and thorough in every phase of the search process. I can say unequivocally that CarterBaldwin was well worth the investment.”

Melson has a PhD in leadership studies from Dallas Baptist University. He holds a master’s degree from The Southern Baptist Theological Seminary and a BA from Murray State University.

About Southwest Baptist University
Founded in 1878 in Bolivar, MO, Southwest Baptist University is a liberal arts university rooted in the Baptist faith offering more than 100 areas of academic study. Its mission is to be a Christ-centered, caring academic community, preparing students to be servant leaders in a global society. SBU is accredited by the Higher Learning Commission and is a member of the Council for Christian Colleges and Universities. With an enrollment of more than 2,300 students, SBU has been selected as one of America’s Best Christian Colleges annually since 1996 and recognized as one of America’s Best College Buys since 1997.